Melissa Brown is an American author that lives in Norwich, England.  She has contributed massively to education and the arts, working in the city’s nationally-renowned Millennium Library; and teaching English and Creative Writing to both children and adults around the county.  She has completed volunteer assignments for Writers’ Centre Norwich teaching creative reading and writing to disadvantaged teenagers in Thetford.  In 2014, Melissa was shortlisted for the IdeasTap Inspires: Writers’ Centre Norwich Writing Competition and longlisted for the Nottingham Writers’ Club’s inaugural National Short Story Competition. She was also a featured poet at last year’s Norwich: City of Stories launch event, where Melissa did a live reading of her poem ‘The Library.’

For the last five years, Melissa  has been running writing events for the Norfolk region of Nanowrimo – National Novel Writing Month – an annual international challenge that encourages entrants to write 50,000 words of a novel within a month. In this position, she has encouraged hundreds of local writers to pen their novel’s first draft and had numerous learners go on to publish their work.

In December 2014, Melissa  ran a successful crowdfunding campaign on Kickstarter to fund the self-publishing costs of her first YA novel ‘Becoming Death.’ ‘Becoming Death’ is a tale of family secrets, falling in love and questioning your destiny, told from the perspective of a grim reaper in training.  She is currently finishing the last steps to produce the final novel and aims to self-publish in early summer.

Email melissabrown_author@yahoo.com to subscribe to my writing newsletter and receive a free bonus article from Madison's handbook Becoming a Grim Reaper. 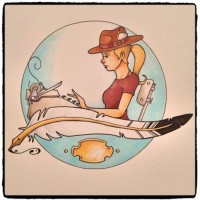 Back to top
Newshound to Novelist

Stand back. I have a plot and I'm not afraid to use it.

A collection of work by Daniel Saunders

A blog about baking blind. Literally.

Exploring the world through the web

Experiencing life in any way you can.

MUSIC and WRITING from a tall Englishman...

Notes on the Craft of Writing

Marketing With A Story

Minding other people’s language. A lot.

The Nerds of Color

Pop Culture with a Different Perspective

I'd rather be watching THIS!